Inside Bill Gates leadership journey of building Microsoft from nothing

Inside Bill Gates leadership journey of building Microsoft from nothing

Bill Gates is one such person who changed the world of technology. While creating a billion-dollar company to satisfy his love for technology, Bill Gates not only influenced his team members but also the world to some extent. One reason for Microsoft’s success is Bill Gates' leadership style. Eager to know more? Let’s get into it.

eing a business owner and a humanitarian at heart explains why Bill Gates adopts transformational leadership. He believes that growing while transforming the lives of people around you is the best way to achieve success.

Bill Gates is amongst the list of leaders in the business world who are known for their transformational leadership. Steve Jobs and Elon Musk are also part of the 21st century’s most influential CEOs list.

Other than creating history and developing high-performance Microsoft products, Bill Gates has other interests that shaped him into an admirable personality. His inspirational charisma not only got him success but love from the masses.

Before dissecting Gates' leadership style, let’s get a sight of his journey so far.

Bill Gates' love for software programming and technology started in his early childhood. After completing his schooling, Gates enrolled at Harvard University. However, his journey at Harvard didn't last quite long, as he quit in 1973 after reading an article about Altair microcomputers.

To pursue his passion, Bill Gates, along with his friend Paul Allen, started “Microsoft”, which is the world's largest personal computing software company in today’s time. On starting this company in 1975, Bill Gates along with his co-founder had many breakthroughs including the programming language BASIC and the MS-DOS program for IBM.

Besides being a business owner, Bill Gates juggled multiple roles like software developer, philanthropist, humanitarian, author, and investor. After a decade of starting Microsoft, Gates was included in the Forbes list of the richest people in the world. He held this position for 14 years (1995-2003).

As the co-founder and former head of Microsoft, Bill Gates adapted a transformational leadership that not only changed the company culture but also motivated its employees to be the true advocate of the company.

"No matter how much money you have, you can't buy more time.” - Bill Gates

Bill Gates considers time to be the most valuable asset in his life. He knows success doesn't happen overnight and instead; it is cumulative of your hard work and efforts.

Till today, he is very peculiar about his time. Bill Gates believes that he can buy anything in the world, except for more time. Following this ideology, he plans his day very precisely and ensures that his time is used orderly. He maintains a tight schedule with every minute being dedicated to a specific task.

While adopting this approach himself, Bill Gates encourages his team members to do the same. 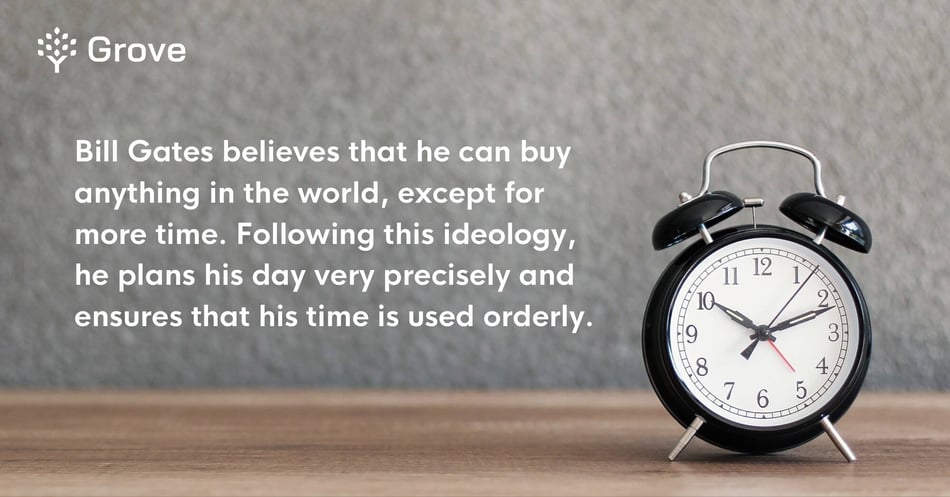 Gone are the days when dictating employees drove results in a company. Bill Gates' leadership style not only respects employees but also gives them room to get better. This is the approach that today’s advanced business world calls for.

Being a transformational leader, Bill Gates brought a change in its employees' lives and the society at large. This approach helped the employees exceed their caliber and deliver performance that made Microsoft what it is today.

A company’s success largely depends on the employees. So, the first step to having a productive workspace is to bring out the best in your team. Empower your employees to explore new things that help them understand their skill set, motivations, and abilities.

Enjoy success, but learn from failures

Each failure brings you one step closer to success. So, instead of being scared of it, embrace it and learn something from it. As Bill Gates always said, “It is fine to celebrate success, but it is more important to heed the lessons of failure.”

94% of employees say they would stay at a company longer if they invest in training. Creating a learning culture allows employees to upskill their knowledge and abilities. This helps improve their performance that benefits not only the employee but also the company.

Bring the change you wish to see

There you have it, the best leadership skills used by Bill Gates to become who he is. So, it is not a big deal if you are just starting or have many businesses. Try the approach that suits you well. Nothing can get you more success than being your best self.

Watch out for 10 toxic culture red flags at your company

Understand the reasons why job posting sites are crucial to your ...

The Covid-19 pandemic accelerated the world’s acceptance of remote work ...

The top HR Influencers in Asia to connect and follow (Updating)

No doubt, the HR field is always under the influence of the top ...